Get ready to explore Porto with our free walking tour, the city where Portugal was born. Porto is very famous for its Historic City Center, for the quality of the wine, for its bridges, its architecture, and its gastronomy.

With this tour, you will be discovering all of the Historic City Center, which was classified as a World Heritage Center by UNESCO, in 1996.

Click on the map, to open this Porto Walking Tour on Google Maps.

This tour will take you a full day, with stops on all the landmarks. If you want to do just the stroll and no stops, it will take almost an hour.

There is no better starting point for this tour than on the Avenida dos Aliados, the center of Porto. If you are staying in the Historic City Center, it should be easy to walk there. And if you are staying on the outside, then there is a subway station right in the middle of this avenue. Be aware, if you are driving, it is better not to take your car. Use public transportations or take a taxi.

Click on the name of the stops, to open its location on Google Maps. 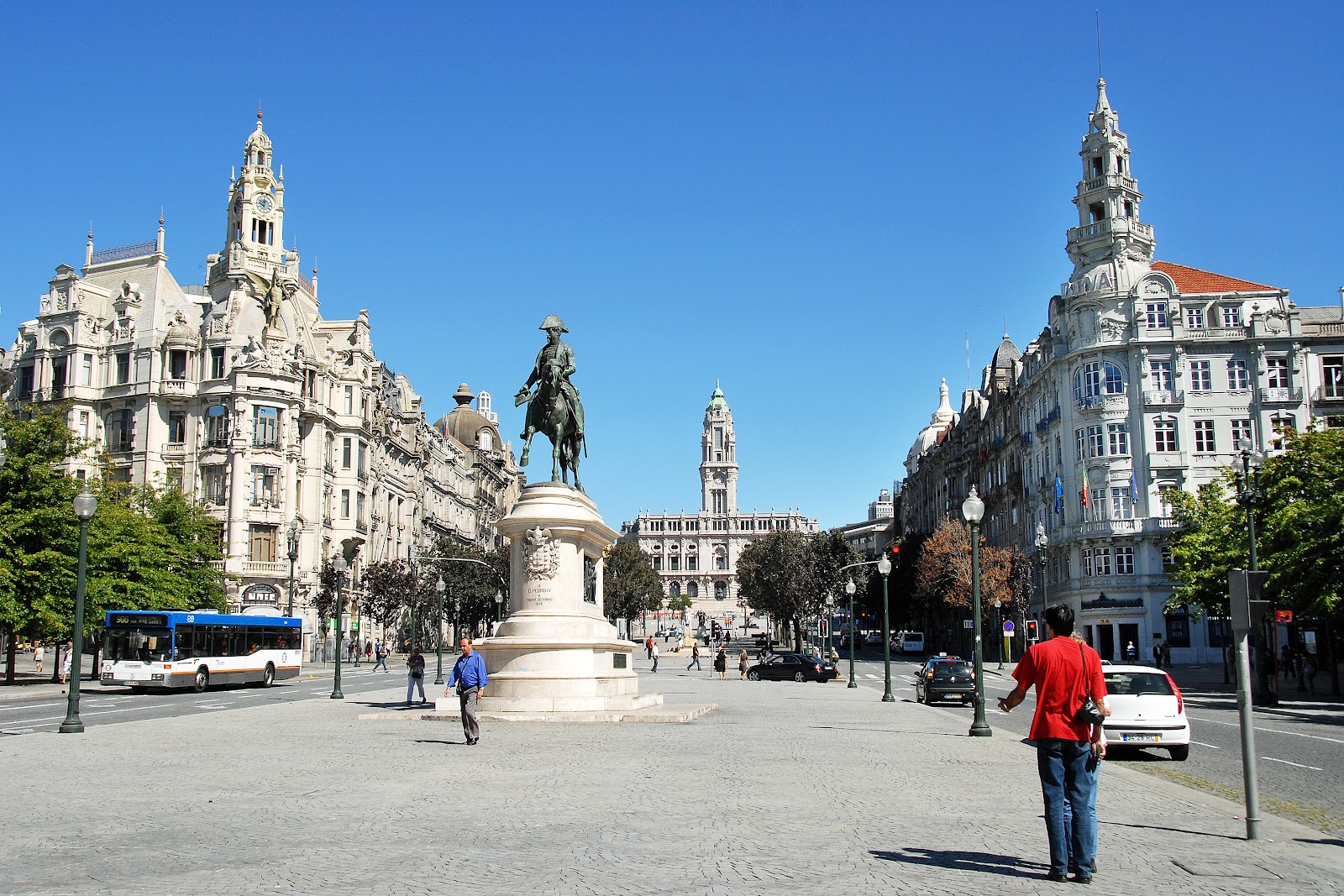 Avenida dos Aliados is the main avenue of Porto and considered to be its center. Built in 1916, this avenue is filled with magnificent architecture, making it the visit card of Porto.

On the top of this avenue, you will see an imposing building. This is the city hall of Porto.

When walking down on the beautiful Portuguese cobblestone present in this avenue and appreciating its architectural design, look for the Macdonalds, almost on the end of the avenue and at your left, a bit hidden behind the trees.

This is not your normal Mcdonald’s, this one is considered to be the most beautiful in the World. It is on the building of the old Cafe Imperial, it still keeps its 1930’s facade, entrance, original counters, chandeliers, and stained glass windows. So take a peek inside.

When you reach the McDonald’s, look to the other side of the avenue and you will see a small street, the Rua da Fábrica, going a bit uphill. At the end of this street, you will reach your next stop; the Praca de Carlos Alberto. And don’t worry, this is going to be the only uphill part of this tour.

But while walking this small street, take a look at the great renovated vintage shops, as this was the old shopping street of Porto, like the Oporto Craft Market, a small artesian shop filled with amazing pieces.

The square dates back to distant times and is the result of a crossing of the old roads, leading outside of Porto. As a result, this square was very lively and was the place to search for accommodation and for horseshoeing.

The building facade you see, taking one complete side of this square, is the old Carmo Hospital. Inaugurated in 1800, this hospital was kept working until recently. Now the plans are to be converted to a five-star hotel.

And for the coin collectors, right on the corner of this square, you will see the Palace of the Viscounts of Balsemão. Here you can find one of the largest collections of Portugal, dedicated to the study of Greek, Roman, Hispanic, Arabic, and Portuguese numerals.

And it was in this Palace that the King Of Sarden, took refuge in Portugal when he was dethroned from his throne in 1849.

Before leaving for your next stop, locate the small vintage kiosk in one of the corners of the central square. You can’t miss it, because it is very red, and it makes a cute picture.

Although this square has the name Praca de Gomes Teixeira, a professor at the University that you can see in this square, the locals call it the Praca dos Leoes (Lions Square), because of its beautiful fountain.

The building of the University, right behind the fountain, was built in 1803 in a neoclassical style, to accommodate the needs of the mercantile bourgeoisie of Porto. Only in 1911, it became the University of Porto, the second biggest university in Portugal.

A bit further you can’t miss the Carmo Church, with its beautiful Portuguese white and blue tiles side and its amazing Baroque style facade. Built between 1756 and 1768, it was closed to the public for a long time. But these days, it is possible to take a tour of the inside of this church. Inside you will see the Main house, Church, Catacombs, Noble Hall, and Sacristy, allowing a glimpse into the Church’s rich heritage, which includes paintings, sculptures, liturgical robes, and relics

Going downhill from the opposite side of the Carmo Church, you will reach one of the most famous and beautiful bookstores in the world, the Livraria Lello. Built-in 1906, in a neo-gothic style, when you step inside this book store, it will make you feel that you are in a fantasy film.

Maybe for that reason and because J.K. Rowling lived in Porto for a year, it was believed that this bookstore inspired the writer for the Library of the Harry Potter books. But J.K. Rowlings has already stated that it was not. Either way, when you step inside, you will feel that you were transported to another time and place.

Because of the enormous amounts of tourists that entered the Livraria Lello and did not purchase anything, the owners implemented a ticket price just to enter and visit – 5 euros. But, if you buy a book, that full price is redeemed at the book price. Suggestion: if you are not interested in a book for yourself, buy a children’s book, just with pictures. It will be a great present for a family member and it will help Livraria Lello to continue to be open.

Right in front of the Livraria Lello, is the Praca de Lisboa and our next stop is on the other side. The park is built on top of a parking lot, to keep the look of the Historic Center. And if you go through it, you will see various shops, restaurants, and bars. Or if you want, go above it, through the grass and on the top of the park, you will find a wonderful esplanade for a quick coffee. Or of course, you can go around it, but where’s the fun on that? Your choice!

One of the first Baroque churches in Portugal and one of the symbols of Porto, the Torre dos Clerigos can be seen from many parts of Porto. It was built between 1732 and 1763 and was designed by Nicolau Nasoni, an Italian architect and painter.

The complex includes three main elements: the Clérigos Church, the Clérigos Tower, and the House of Brotherhood of Clerics, which connects the church and the tower.

Go inside this 17th-century Roman classicism Church and wonder at its beauty. It is free.

And if you are feeling up to it, buy a ticket, climb the stairs of the tower and you will be rewarded with the most amazing views over the city of Porto.

While you are up there and finished enjoying the views, try to spot your next stop: the Sao Bento station. You can’t miss it because of its roof and the two clocks on its facade.

When you leave the Tower just walk downhill on the main road. You will pass your first stop and then you will reach the Sao Bento station, on your first right.

One of the main monuments of Porto, its facade has French design inspiration, but it is on the inside, where you will discover why it is so important.

Opened in 1896 but only inaugurated in 1916, the main lobby is completely covered in Portuguese white and blue titles, covering a total area of 551 square meters (5931 square feet). These titles represent several events in the North of Portugal, of the past centuries.

So go inside and wonder at the beautiful craftsmanship of these titles. Just be aware of pickpockets, as this is very commonplace for them.

After leaving the Sao Bento station, walk downhill and turn the first small street on your right. You will be in Rua das Flores. A street opened between 1521 and 1525, on the terrains of the King that were used for farming, to accommodate the needs of the increasing population of Porto.

These days it is closed for traffic but has so many beautiful shops and buildings facades. Take a stroll on this street until your next stop.

At the end of the street of Rua das Flores, you will see a big church on your right side. This is the Igreja da Misericordia.

The original church was built in 1502, but after two centuries, the building was almost in ruins. But in 1748 it was rebuilt by the same architect that built the Tower of Clergy, Nicolau Nasoni.

Since 2015 it has been converted into a museum. The ticket is 5 euros and not only you can visit the main church and several wings, but you will also see a great collection of paintings, sculptures, and sacred art.

After leaving the Igreja da Misericordia, keep walking in the same direction, and at the end of the street, turn left and then the first right. A very short walk after, you will see your next stop.

Behind a very green square, there is the Palacio da Bolsa, (the Trading market of Porto). Probably the most luxurious building in Porto.

The construction of this palace began in 1842 with a neoclassical style. It was built due to the closure of the original House of Trading, having the businessmen discuss their trades in the open street. The outside of the building was designed with a mixture of Tuscan architecture and English Neopaladian, while the inside has an extremely luxurious style.

It is possible to visit the interior, but only on a half an hour guided tour. If you are in the mood to see extremely well-preserved wealth and luxury, the ticket price is around 10 euros.

Right on the left wall of the Palacio da Bolsa, you will find a wonderful sight from the XVII century, classified as a National Monument in 1910.

The Igreja de São Francisco has a Baroque style on the outside and an inside filled with beautiful gilded carving. This church began with very humble construction in 1383, as it was a part of a Franciscan convent, but in the XV and XVI century, several wealthy families of Porto became patrons of the monks and paid the construction of several parts of the church.

With a troubling story, visiting this church will make you feel as if you were transported centuries back, right to the middle of a medieval time.

After admiring the two buildings, head downhill, until the riverfront and you will reach your last stop.

Going back to Roman times, the Cais da Ribeira is one of the oldest places in Porto and a part of the Historic City Center. Filled with some story in every corner and on every stone of this area, right next to the river Douro.

It is a romantic place. And, it is also a great spot to come back for a late dinner, an evening stroll, and a late-night drink, with many restaurants and bars.